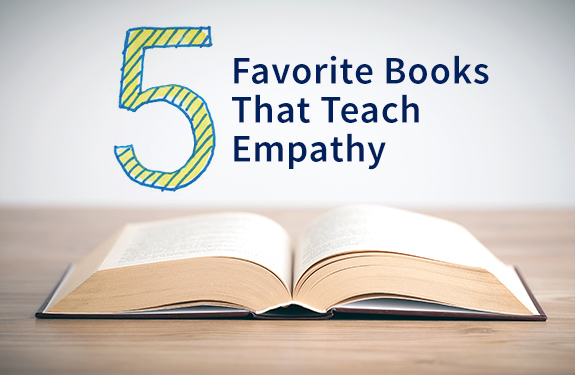 Literature can help children learn to see the world through someone else’s eyes, and developing empathy for characters can help them understand people better. We asked teachers and educators to weigh in on this topic, and came up with five highly recommended children’s books that teach empathy in creative ways.

For 51 weeks, an elephant named Horton sits on an egg since he promised Mayzie the bird that he would do that for her. Horton endures winter, hunters, and getting captured—all while continuing to protect Mayzie’s egg.

Young readers will feel a mix of emotions as they admire Horton’s conviction, fear for his (and the egg’s) safety when he’s captured, and delight in what happens when the egg finally hatches.

Brian feels invisible at school because he’s not included when it comes to being picked for games and getting invited to birthday parties. Then a new kid named Justin arrives. Brian watches as a few kids laugh at Justin for having Korean food for lunch. But Brian befriends Justin and together they find their way.

The Invisible Boy offers opportunities to talk to children about including others, understanding what it’s like to feel left out, and celebrating each person’s uniqueness.

This beloved classic is about a girl named Fern who wants to save Wilbur, a pig on her family’s farm. Wilbur is helped by a host of memorable characters, including a wise spider named Charlotte and a self-interested rat named Templeton. Though Charlotte’s Web contains themes of friendship and love, it also includes a few difficult moments like the death of one of the main characters.

This book is likely to generate meaningful conversations as children come to understand the world through these animals’ eyes, relating to some of their universal struggles, and becoming more aware of different perspectives along the way.

Stargirl is an ethereal new girl who becomes the subject of Leo’s fascination when she arrives at Mica High. She isn’t like any other girl. She wears interesting clothes, dances around school, and plays the ukulele. Students are at first perplexed by her nonconformist ways, and then they’re in awe of them. Stargirl quickly becomes popular but then is shunned, and Leo is forced to choose between his friend’s ways or hers.

Middle school students will undoubtedly discuss subjects like popularity, peer pressure, and conformity. They will empathize with both Stargirl and Leo at different points, revealing the complexities of friendship and individuality.

5. To Kill a Mockingbird

This Pulitzer Prize-winning novel is about two children, Jem and Scout, who learn about racism, justice, and tolerance through a court case that their father Atticus agrees to take. Atticus is a lawyer and decides to defend a black man who’s been accused of raping a white woman. Since the novel is set in Great Depression-era Alabama, this decision is met with heated resistance from many of the townspeople.

Lee’s novel weaves together a range of issues to discuss with students. Their worldview will expand as they gain wisdom from Atticus, witness prejudice and harassment alongside Scout and Jem, and better understand various viewpoints and experiences.

There are so many great books that teach children how to empathize with others, and it’s nice to share memorable examples with other educators.

Kara Wyman has a BA in literature and an MEd from the University of California-Santa Barbara. She spent a decade working with adolescents as an English teacher, the founder and director of a drama program, a curriculum designer, and a project manager for a teen-centered nonprofit organization.