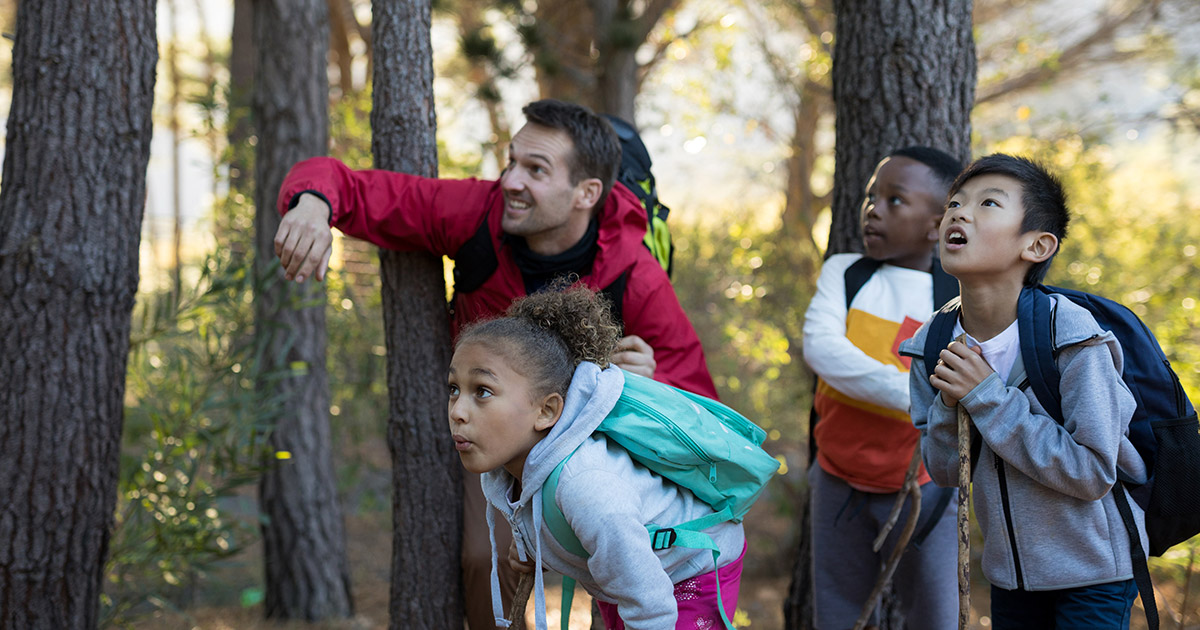 Get Outside! The Outdoor Education Movement Takes Root

Hand a toddler an iPhone, and chances are that child knows precisely what to do with it. Increasing screen time, over-testing in schools, and a national rise in students medicated for attention issues have contributed to the outdoor education movement. This movement gets students out of their seats and into nature.

The call for an outdoor education movement

Richard Louv, author of Last Child in the Woods and co-founder of the Children and Nature Network, coined the term “nature-deficit disorder,” which refers to children’s growing lack of exposure to nature. American families are staying inside more, according to a Nature Conservancy poll that found only 10% of kids spend time outside every day. Recent data shows that kids spend at least two hours in front of screens each day. “There’s been a seismic shift in kids’ media use to mobile,” said Jim Steyer, CEO of Common Sense Media. “These devices are shaping everything. This has profound implications for families everywhere, from how we relate to each other and communicate with each other, to our kids’ social-emotional and cognitive development, our inability to pay attention to each other and our addiction to these devices.”

Beyond increased technology use, students take an average of 112 standardized tests between pre-kindergarten classes and 12th grade, according to the Council of the Great City Schools. As we move farther away from the natural world into a world of technology and testing, a growing movement is taking shape to get kids out of the four walls of a classroom and into the outdoors.

According to Happy Acres Forest School in California, the outdoor school movement started in Europe in the early 1900s, expanding to Denmark and Sweden in the 1950s and Germany in the 1960s — which now has over 700 forest kindergartens. It was rooted in the “Waldorf-Steiner approach to early childhood education that was child-led and play-based, with adults as facilitators, not teachers. Steiner believed that imitation and example were more important than words and his approach aimed to ‘honor and protect’ the wonder of early childhood.” Forest kindergartens now exist in the UK, Canada, Australia, Asia, and the United States. There are approximately 100 forest kindergartens in the U.S. today. Many of the outdoor education programs come in the form of forest kindergartens or extra-curricular programs for older students, leaving elementary and secondary students largely stuck inside the classroom.

The Centers for Disease Control notes that 6.1 million kids were diagnosed with ADHD in 2016, which correlates to schools around the country shortening recess periods to compensate for rigorous academic demands. Kids are spending more time in their seats and less time playing, running around, and exploring the outdoors. Angela Hanscom, a pediatric occupational therapist and the founder of TimberNook says “It is rare to find children rolling down hills, climbing trees, and spinning in circles just for fun.” Her classroom research found that because of increased seat time, the core strength and balance of students remain underdeveloped. “Fidgeting is a real problem. It is a strong indicator that children are not getting enough movement throughout the day.” Hanscom notes that short recess periods are not enough. “Twenty minutes of movement a day is not enough! They need hours of play outdoors in order to establish a healthy sensory system and to support higher-level attention and learning in the classroom.” The American Forest Kindergarten Association agrees. The AFKA has created an outdoor education model for schools looking to provide the best natural learning structure. “Children cannot bounce off the walls if we take away the walls,” Erin Kenny, founder of the AFKA, says. The AFKA model requires 1-3 hours of free play outside, called “Flow Learning” or child-led learning. This involves inquiry-based teaching and experiential learning. Teachers are facilitators as students discover, question, hypothesize, and problem solve. There’s also documentation of learning, which is used to improve instruction, instead of being used as a value judgment on kids.

Read more: Examples of Outdoor Activities to Get You Students Writing

A study from Environmental Health and Preventive Medicine shows that people who spent time walking in a forest had lower blood pressure and lower levels of the stress hormone cortisol compared to those who strolled through an urban environment. The practice of “forest bathing” or shinrin-yoku has become very popular in Japan and entails spending unstructured time in a forest, taking in the experience through one’s senses. One study found that inhaling the scents of trees (phytoncides) can reduce stress hormones and the body’s immunity, while another study found inhaling cedarwood oils led to a reduction in blood pressure. “As the young spend less and less of their lives in natural surroundings, their senses narrow,” Richard Louv warns, “and this reduces the richness of human experience.”

Outdoor education can have a positive profound effect on at-risk youth. “The outdoors can provide a physical and mental refuge that helps us process and deal with the stress of daily life,” explained Ben McCue, Executive Director of Outdoor Outreach. “This can be especially transformative for youth who, growing up in underserved communities, are disproportionately affected by violence, unemployment, and school drop-outs.” Christine Lynn Nortrom’s (2004) study on the efficacy of wilderness therapy on adolescent depression found 70% of adolescent clients reporting decreased depressive symptomatology after treatment. While many outdoor educator programs for at-risk students focus on challenges and adventure, the “ecopsychology” of merely being in nature shifts mindsets and grants time for personal reflection. One study noted that adolescent participants “used words and phrases like ‘reflection,’ ‘thinking about my life,’ or even ‘huge epiphanies’” in their survey responses, noting that walking, paddling, and journaling in nature provided mental space to heal from trauma or to connect with themselves.

Cognitive Benefits of Kindergarten in the Forest

Info on our MEd in Curriculum and Instruction: Environmental Education

Ultimate Guide to Forest Kindergartens in the U.S.

Jennifer L.M. Gunn spent 10 years in newspaper and magazine publishing before moving to public education. She is a curriculum designer, teaching coach, and high school educator in New York City. She is also co-founder of the annual EDxEDNYC Education Conference for teacher-led innovation, and regularly presents at conferences on the topics of adolescent literacy, leadership, and education innovation.