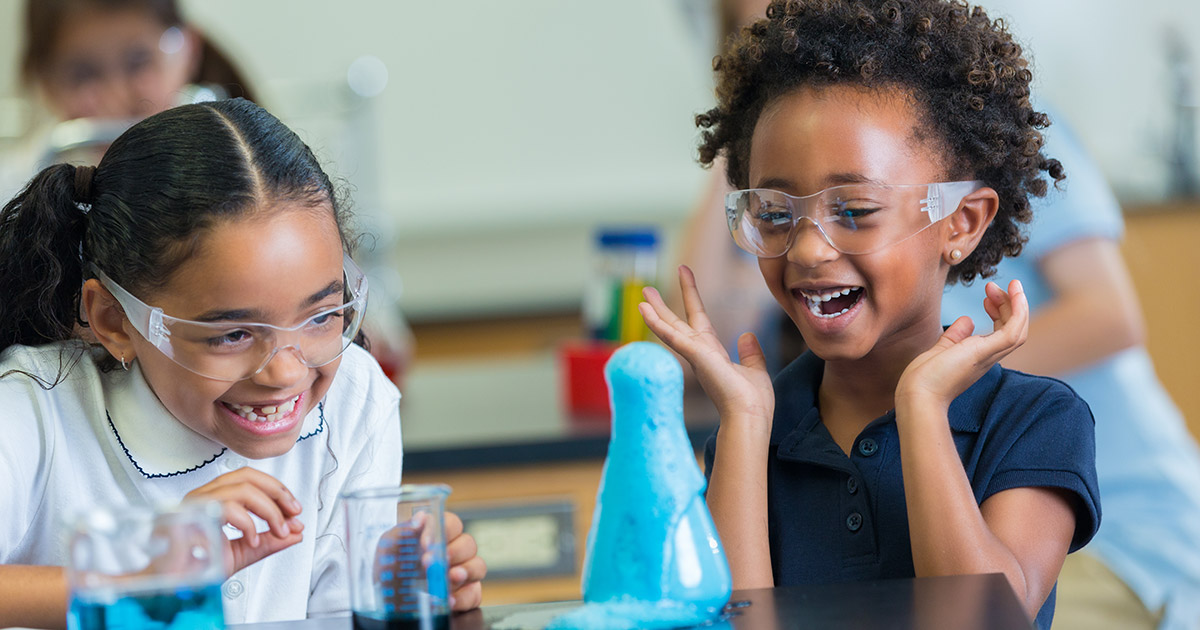 STEM has been a priority in many U.S. schools for at least a decade but, in the past few years, education experts have noticed that something was missing — that future scientists and engineers also need soft skills like creativity, collaboration, and communication to solve problems. “We realized that language arts, social studies, and visual arts are crucial and can’t be taught in isolation from science and technology,” says Sarah Elliott, EdD.

Don’t stress about incorporating all five elements of STEAM into a lesson or activity, says Christine Foley, MEd, a teacher and technology coach in Monroe Township, New Jersey. That’s often not possible unless you have lots of time to plan. “STEAM isn’t meant to replace traditional teaching,” she says. “And it’s not meant to be done all the time. We still need to teach math facts and phonics, but there are ways to bring other disciplines in.” If you’re teaching fractions in math, for example, have students build a bridge using fractions of straws. Then you can include a design discussion about symmetry or a civics chat about public safety.

One strategy in planning a STEAM unit is to think long-term, says Tony Zini, a STEAM teacher at Perry Elementary in Huntington Beach, California. Develop a storyline — the broad summary or road map of a teaching unit, which might take your class days or weeks to complete. “We don’t cover everything in a single lesson but, by the end of the unit, my students have experienced all five of the STEAM components,” he says.

Twice a week, Sarah Elliott works with fifth- and sixth-grade students in a maker lab at Faith Lutheran School in Lacey, Washington. In a multiphase unit on habitats, students investigate the natural habitats that animals live in (science); use software to design a constructed habitat (technology); review design options and develop a prototype (engineering); calculate and measure the materials needed and the cost to construct it (math); and develop the prototype and create an advertising brochure or oral presentation to “sell” the habitat to the local city council (art). Don’t have a maker lab at your school? No problem! If that’s not yet possible, have kids create a comic strip that illustrates a science lesson, or create packaging for a new product out of construction paper.

Carla Swenson, a K–5 STEM teacher at Irle Elementary in Glasgow, Montana, has just begun adding the arts to her lessons, and finds that the additional entry point really appeals to some of her students. In a recent unit on flowers and pollination, her kindergartners made paintings of lupine flowers while they were discussing the relationship between butterflies, bees, and flowers. “The artistic kids really understood the parts of a flower and other scientific vocabulary, which may not have resonated with them otherwise,” she says.

Engaging his struggling readers is an ongoing challenge for Tony Zini, so he often taps into STEAM principles to boost students’ engagement. “My kids were reading about Orville and Wilbur Wright, so I had them do a simple engineering challenge: Who could make the best paper airplane?” He says that after this activity they were much more interested in reading about how the Wright brothers got their plane off the ground.

When your students’ projects incorporate so many diverse subject areas, exploration is what it’s all about — and failure is a key part of the process. “With STEAM, it’s not going to be successful the first time, and we’ve got to get students used to that,” says Susanne Smith, who teaches first grade at East Side Elementary in Marietta, Georgia. Smith has had her students build sculptures from recycled materials and program robots to paint geometric shapes. When her students’ attempts don’t initially go as planned, she encourages them to become curious and ask questions: What went wrong? What could we do differently? What else can we try?

Reassure your students that it’s OK if their hypothesis ends up being proven wrong because they’ve learned from it. Sometimes they come up with a great design for a boat or a birdhouse, and then it’s a complete failure. But they’ve learned what doesn’t work, which is just as valuable. And what’s true for students is true for teachers, too. When you’re launching a STEAM project, remember to be flexible and expect a few flops.

Squeezing STEAM into your teaching can take intentional effort. “It involves changing your mindset so that instead of just teaching language arts and just teaching math, you ask: How can I include art in this lesson? How can I increase my students’ ability to communicate in a math lesson?” says Elliott.

Reading and writing are the top priorities for Juan Gonzalez, a third-grade literacy teacher at Lobit Elementary in Dickinson, Texas — but he’s discovered ways to incorporate STEAM into his lessons. “I look for nonfiction pieces that allow some kind of STEAM component, and then I build off that,” he says. After his students read an article about a man who created an entire garden from Legos, he challenged them to build their own Lego garden, a project that incorporated art, design, science, and engineering. “Giving them the experience of what they just read about furthers their connection to the text,” he says.

Discover ways to incorporate STEAM into your own lessons! Check out our curated content collection for STEAM teaching resources to explore cool project ideas to impress your classroom and reinforce learning concepts.