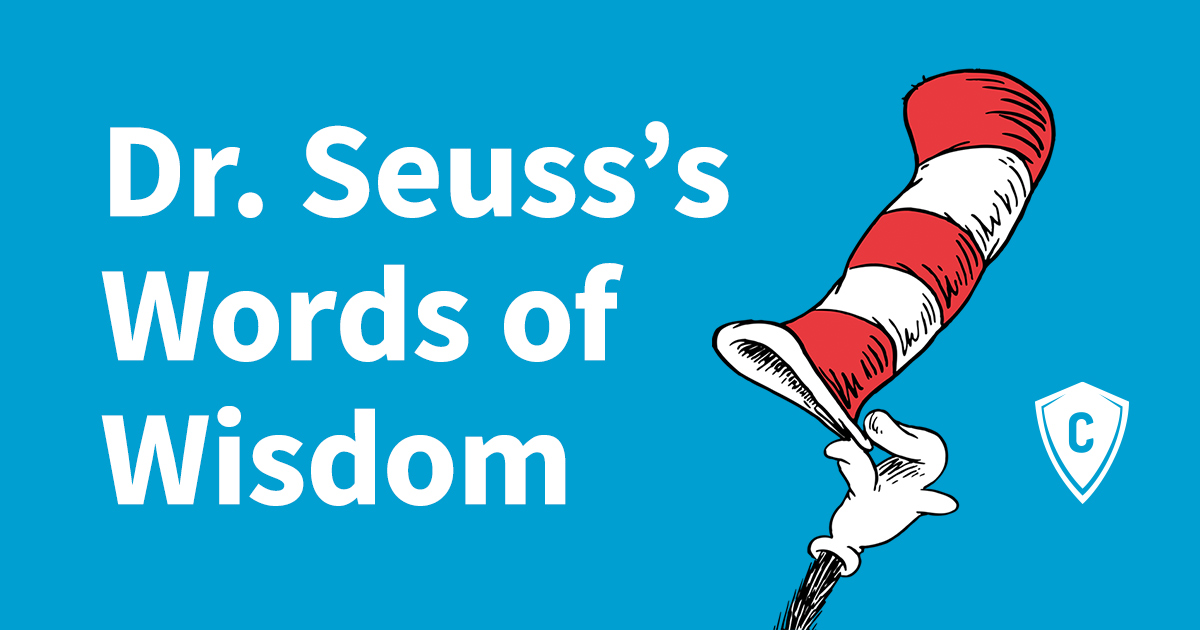 Dr. Seuss’s Words of Wisdom from “Oh, The Places You’ll Go” and Other Books

Many of us grew up loving Dr. Seuss books. To this day, you probably can recite at the very least a line or two of his rhymes by heart. Kids worship him, parents adore him, and teachers revere him. We teachers, in particular, have created Pinterest boards galore showcasing classroom projects, bulletin boards, and learning activities centered on his many titles. And, while his poetic language may sound simplistic, his stanzas contain quite sophisticated messages.

Don’t give up. I believe in you all. A person’s a person. No matter how small.

Theodore Geisel was born in 1904 in Springfield, Massachusetts. As an undergrad at Dartmouth College, he was kicked off the Jack-o-Lantern magazine as Editor-in-Chief after he was caught drinking in his dorm room (prohibition era!) Yet he continued to write for the magazine under a pseudonym, his middle name of Seuss. Later he dropped out of Oxford to return to the States as a cartoonist and writer for magazine advertisements.

I have heard there are troubles of more than one kind. Some come from ahead and some come from behind. But I’ve bought a big bat. I’m all ready you see. Now my troubles are going to have troubles with me!

His first children’s book, And To Think That I Saw It on Mulberry Street, was published by Vanguard Press in 1937 after being rejected 27 times by publishers (way more than J.K. Rowling!). Under the pen name of Dr. Seuss, he began writing eight hours a day. The Cat in the Hat was published in 1957 after Houghton Mifflin and Random House asked him to write a primer that used 220 vocabulary words.

When you think things are bad, when you feel sour and blue, when you start to get mad… you should do what I do! Just tell yourself, Duckie, you’re really quite lucky!

Several of his stories have gone on to be realized as movies, and Seuss won numerous awards including three Emmys, three Grammys, an Academy Award, and a 1984 Pulitzer Prize. Throughout his career, though, Seuss claimed that he never wrote for kids: I don’t write for children, I write for people. Once a writer starts talking down to kids, he’s lost. Kids can pick up on that kind of thing. With his typical A, B, A, B rhyme scheme, Dr. Seuss shared his humor and wisdom with generations.

One book, in particular, resonates with the notion of resilience. If you haven’t read it in a while, pick up Oh, the Places You’ll Go and reread it. Interestingly enough, this story was his final book, published in 1990 (What Pet Should I Get? was published posthumously in 2015). Oh, the Places You’ll Go is a common graduation gift for high schoolers, but its lessons really do apply to kids much younger if you read it through the lens of building resilience.

You have brains in your head. You have feet in your shoes. You can steer yourself any direction you choose. You’re on your own. And you know what you know. And YOU are the one who’ll decide where to go …

In Oh, the Places You’ll Go,  Dr. Seuss hits upon themes of having a dream, taking a chance, having high expectations, and embracing the unknown. Stanza by stanza, you can align skills around risk-taking, goal setting, and perseverance. The book is written in the second person, so the protagonist is you, the reader. Like many classic fairy tales, his tale acknowledges not just the upside, but the often tumultuous realities of life. He cautions that there are Bang-ups and Hang-ups, especially when it comes to the purgatory of indecision, the doldrums of loneliness, and the perils of fear. He admits that un-slumping yourself is not easily done. Yet his rhymes always circle back to encourage lifelong skills such as autonomy, independence, and self-confidence. His tale is truly one of empowerment. And the moral of his story is that you are the winning-est winner of all.

Oh, the Places You’ll Go has become a modern classic for kids, but it also is a great story for those in the classroom who are helping to shape kids’ futures day in and day out. Teaching is a great responsibility and the profession comes with many daily expected and unexpected twists and turns; especially nowadays with so much fear, change, and uncertainty. So when you are having one of those days and you need that little nudge of encouragement, just remind yourself… Kid, you’ll move mountains.

EXTRA CREDIT: Want a resilience scavenger hunt? Try to identify which other books the above Dr. Seuss quotes come from.

Darri Stephens is a former member of Teach for America and a seasoned educator, with more than 10 years’ experience in Los Angeles and New York City public schools. She’s a published author, who has also worked for education-focused media companies including Nickelodeon, IMAX, EdSurge, and Discovery Education. With master’s degrees in education from both Harvard and Stanford, she’s passionate about creative curriculum development that pushes boundaries, especially considering the influx of today’s technologies. Her most recent positions as Senior Director of Content at Common Sense and Director of Education at Wonder Workshop underscore her love of instructional design, writing, and the ever-changing edtech world — so much so that she has now founded her own content consulting agency, Darrow Ink.