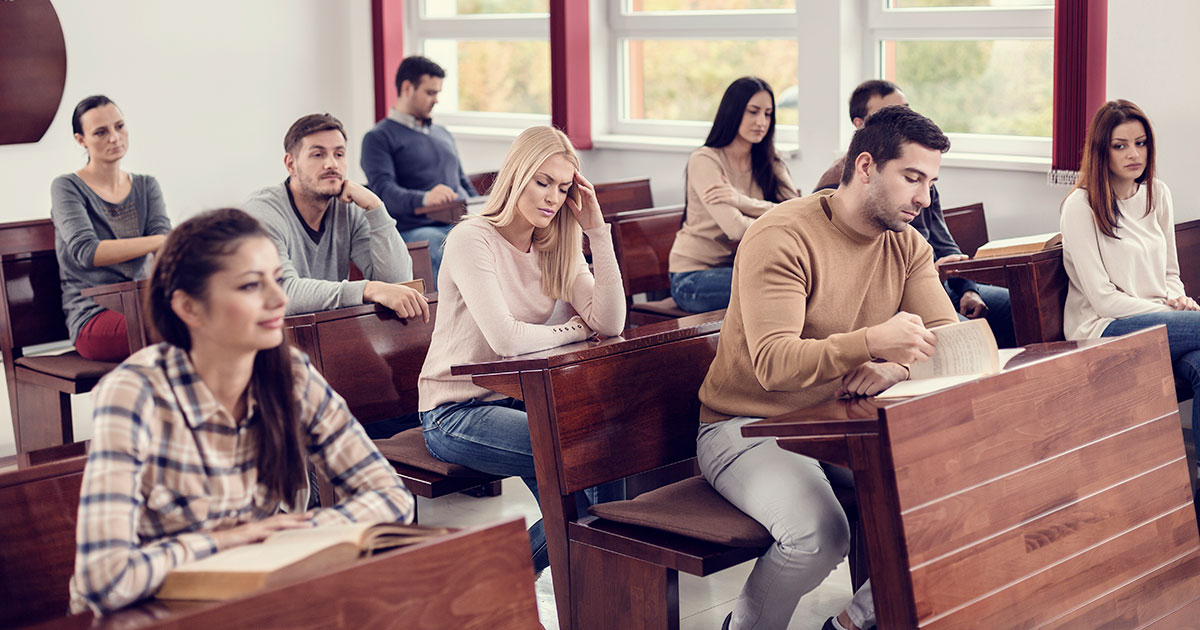 Engaging Adult Learners, Part I: How to Avoid Being Boring and Confusing

Most teachers have, at some point, looked out over their class and noticed that, despite their best efforts, the students seemed disengaged. No matter at what level of the curriculum you teach, holding your students’ attention can be one the most difficult aspect of instruction, especially in today’s media-permeated classrooms. Keeping adult learners interested can be especially challenging because they are likely to be busier — and more demanding — than their younger counterparts. The problem of engagement is compounded when teaching online, since the format makes it harder to gauge the level of involvement in the first place.

I was forced to come to terms with the necessity of developing strategies for engaging adult learners during my first semester as a professor. I was asked to teach a graduate seminar, which made me excited, but also nervous. Although I had received ample pedagogical training and had been a teaching assistant, I had never had any instruction in graduate education specifically, and I’d never really thought about capturing the attention of people around my age or older.

For lack of a better plan, I decided to emulate seminars I had taken, even though they had often been among my least favorite classes. Their typical modus operandi was reading hundreds of pages for homework, listening to a short introduction given by the professor, and then discussing the texts for two-and-a-half hours — in other words, yawn! Class time was punctuated by occasional student presentations, guest lectures, or films, but the seminars consisted mostly of seemingly aimless talking. Although I am sure my professors had specific objectives for each class, they weren’t made evident; so as not to suppress students’ ideas, I presume.

Adopting this familiar methodology for my course proved a disaster. My seminar was just like those I had taken: boring and confusing. This wasn’t for lack of preparation; I had a specific agenda for every class and provided an introduction to the day’s reading, just as my professors had done. Although I felt confident that the subject material of my course was compelling and that I had sufficient knowledge to teach it, I realized that I didn’t know how to do so. My own experience made me aware of what had gone wrong, but I wasn’t sure how to rectify the problem.

Recognize the limits of concentration

I began thinking about the differences between the undergraduate classes I taught, which were successful, and my graduate course, which wasn’t. Duration was an important difference: the students seemed to favor 50-minute, Monday-Wednesday-Friday classes over 75-minute, Tuesday-Thursday ones. Everyone seemed to find the 150-minute seminars difficult, including me.

Given the fact that the difference in age between undergraduate and graduate students was often only a year, I realized that attention spans probably didn’t vary much between the two, even if expectations for them did. The challenge became, then, how to sustain their attention for more than 50 minutes — or even just for 50 minutes, since some undergrads had problems paying attention in Monday-Wednesday-Friday courses, too. I developed two strategies that proved effective, no matter at what level I was teaching:

The concept of chunking information was first articulated by Harvard psychologist George Miller in the 1950s. He observed that most people had problems remembering more than seven pieces of information and concluded that there is a neurological limit that makes it difficult to retain any more. Although I had learned about this theory during my pedagogical training, it had never occurred to me to apply it to the structure of a class, let alone to an entire term.

Miller’s idea made me realize that classes without an overt structure (i.e., those that weren’t divided into discernable chunks) risked being confusing. Moreover, courses that introduced many concepts, as was frequently the case in 75- and 150-minute classes, presented too much information for students to retain. Although I was in the habit of writing concept-based outlines for each class, I began to consider how much information I was presenting and how clearly each concept was identified.

Unsurprisingly, I discovered that Monday-Wednesday-Friday classes, in which I introduced fewer ideas, were more engaging for participants. This realization still didn’t solve the problem of seminars, however; I had to fill all 150 minutes one way or the other. Going over concepts more slowly or diving deeper didn’t seem like the answer to the problem.

Lay your cards on the table

My solution was to divide each class, no matter the length, into identifiable parts and to state the objective of each. I would write a plan for the period on the board so that the students could see how far we’d progressed.

Here’s the structure I’d post for a 50- or 75-minute period. I’d also include details relevant to the subject of the actual course.

This structure worked best for Tuesday-Thursday classes, which allowed for ample development of concepts through group discussion. It was more difficult to fit all of the above into a Monday-Wednesday-Friday meeting, but I found that by reducing the number of questions posed for small group work and then discussed by the class as a whole, I could cover a reasonable amount of material.

For seminars, I took a slightly different tactic that I occasionally adopted for weaker Tuesday-Thursday sections, as well:

Providing guideposts for the day’s agenda gave students a sense of progression and accomplishment. Although I was occasionally forced to make alterations — usually by removing activities for which we ran out of time — I assured students that these deviations would not betray our cognitive path and that we were still on the way to a consequential destination.

Even though the above experiences occurred in a physical classroom, the strategies described are valid for online courses, as well. Effective teaching necessitates a variety of activities whose purpose is evident. Although it may be tempting to assign large amounts of material so that students can “get through” all the information relevant to a subject, be realistic about how much they can plausibly assimilate during a week or a semester. The focus should be on results garnered through meaningful learning experiences.

As you put conceptual pieces together to create a cogent whole, reveal both the process and the result to the students so that they understand the overall design and how to achieve it. Ideally, you want students to assemble ideas into their own mental picture. Helping them model (not copy) your own processes will enable them to do so.

In a subsequent post, I will describe how to design the activities listed above so that they engross adult learners. The strategy for keeping students involved during long class periods is essentially the same for creating engaging activities: make students aware of what they are doing and let them know why they are doing it. In other words, have adult learners practice metacognition; get them to reflect on what they are learning so that they are personally involved in both the process and the subject.

Tom Armbrecht has a PhD in French studies from Brown University. Formerly a tenured professor of French, he taught literature and philosophy to both undergraduate and graduate students before deciding to focus his career on online learning. His current position as an online learning architect allows him to capitalize on his pedagogical expertise to design courses that engage and inspire students and teachers alike.