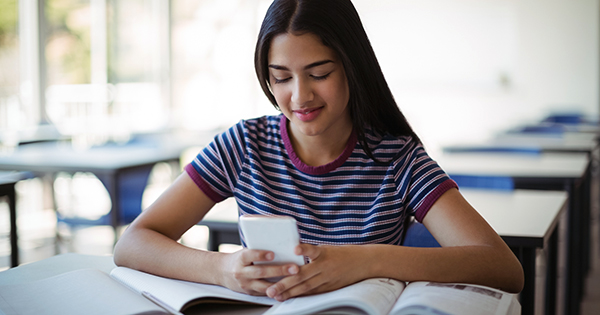 5 Benefits of Using Cellphones in School: Smartphones as Learning Tools

Today’s students are digital natives. Nearly three out of four teenagers have access to a smart phone, and so many students take them to school every day. For some teachers, it’s probably more uncommon to see a student without one than with one.

But are cellphones in the classroom a good idea? Do they serve as a valid learning tool or, or are they just another distraction contributing to the social disengagement of children?

We took a look at the arguments for using cellphones in class, along with the number of students with phones and the number of apps available to them.

Cellphones have obviously come a long way since the two-pound, $3,995 Motorola DynaTAC 8000X was first introduced in 1984. Subsequent generations of mobile phones continued to evolve and became more affordable and portable, and now offer so much more value beyond a means to call others.

In the ongoing discussion surrounding the efficacy of digital devices in the classroom, schools must face the fact that smartphones are already being utilized by students of all ages. According to an eMarketer article referencing a February 2016 survey by Flagship Research, “Among the 14- to 18-year-olds polled, 87% said they ‘own and use’ a smartphone—i.e., penetration about a dozen percentage points higher than eMarketer’s figure for 12- to 17-year-olds.”

Clearly, young people are acquiring smartphones at a staggering rate.

From colors to ABCs to “The Little Engine That Could,” what used to be taught through books can now be learned through apps—and that’s just for younger generations. The applications for using smartphones from preschool through college are in place and growing.

Why smartphones should be allowed in school

With the widespread use of smartphones by younger and younger students, what are the practical reasons for allowing smartphones as a learning tool in the classroom? Consider these points:

How to, not if to, use smartphones

Challenges of leveling the playing field, maintaining proper use and control, and preventing abuse with smartphones are similar to problems faced by teachers in the past. Back then, it was passing a note; today it is texting. Both are fairly avoidable, but it doesn’t mean phones should be banned (paper wasn’t!).

We believe the focus of smartphone use in the classroom should shift from not if they should be used, but how to best use them. While critics will cite the opportunity for cheating, unauthorized socializing, and social isolation issues involved, the fact is students are using smartphones every day, and they are using them to learn. Teachers can be a positive force in helping students use them properly in the classroom.

Our advice: set ground rules for smartphones in your classroom, along with clear expectations of what happens if they’re used inappropriately. Just like with anything else, too much of something can be a bad thing—but just enough, can be perfect for learning in new ways.

Further your knowledge about the digital classroom

Here are more articles to enhance your understanding of how digital devices can affect learning: