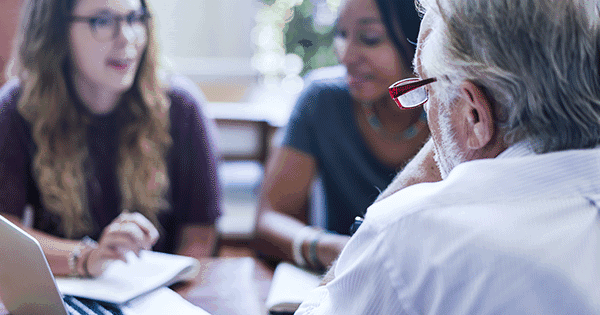 5 Strategies That Co-Teachers Can Use to Work Better Together

Many teachers share their classrooms with other educators, and you might be one of them. Sometimes one educator is teaching the whole class while the other is working with English learners, students with special needs, and/or those with learning differences.  Here are five ways to help make the transition from flying solo to working in… Read More

According to the National Institute on Deafness and Other Communication Disorders (NIDCD), between eight and nine percent of young children have a speech sound disorder. One common challenge is articulation, when a child pronounces “S” or “R” sounds incorrectly, saying “thock” instead of “sock” or “wabbit” instead of “rabbit.” Elementary students with speech sound disorders… Read More

How to Modify Your Classroom for High-Functioning Autistic Students

In late May of this year, video of a 10-year-old’s speech competition entry took the Internet by storm. It wasn’t due to inappropriate material or a surprise visit from a superstar, but because speaker Connor Yates shared his personal experience of what it means to have high-functioning autism (HFA). Connor Yates goes viral with a… Read More

The most impactful ways that non-profit Neuro Touch Inc. supports families dealing with a child’s learning delay is to share resources and educate them on the types of questions to ask. Neuro Touch’s founder and CEO, Heather Lascano, said these resources can vary according to the needs of the parent or family that requests help…. Read More

Hyperactivity or Something Deeper? Childhood Trauma Misdiagnosed as ADHD

The fact that one in every 11 school-age children in the United States is diagnosed with Attention Deficit Hyperactivity Disorder (ADHD) has warranted plenty of attention. Much research has focused on the efficacy of behavioral therapy or medication as well as a list of symptoms — hyperactivity, impulsiveness and inattention — used to identify ADHD…. Read More

How to Engage Gifted and Talented Students in the Classroom

Giftedness is an intellectual ability significantly higher than average. The federal government defines gifted children as “those who give evidence of high achievement capability in such areas as intellectual, creative, artistic, or leadership capacity, or in specific academic fields.” However, there aren’t any national standards for identifying gifted students, and it’s usually left to states… Read More

Because there are so many different types of autism spectrum disorders (ASD), special education teachers use a trial-and-error method of finding an ASD student’s proper accommodation, support and placement in school. Children who are on the autism spectrum often have trouble understanding complex emotions and social cues and may require more repetition than average learners…. Read More

Creating a plan for a year in an elementary school classroom for special-needs children requires flexibility and, in many cases, unique activities for each child depending on their situation. This classroom environment can be very rewarding for teachers who have created a solid base in classroom and curriculum design—and because you’re here reading this, you’re… Read More

Advice on the Best Practices for Teaching Special Education

Learning the best practices for special education gives teachers a crucial advantage in the classroom, where special-needs children face a broad range of difficulties in learning. The reasons for these difficulties are as unique as the children themselves. Teachers who understand the best practices can act appropriately to keep the learning momentum going forward. Here’s… Read More

What to Consider When Looking at Special Education Teacher Jobs

Special education teacher jobs provide exciting opportunities to engage children who are often pushed aside or not cared for properly in meaningful learning situations. However, finding the right position can make a huge difference in the success and the reward you get from this career choice. Though most teachers will have degrees that afford them… Read More

Students who suffer from Emotional and Behavioral Disorders, or EBD, often find it very difficult to control their behavior and focus on their work in the classroom. EBD students also commonly lack the impulse control and the emotional balance that is necessary to handle social interactions with other students effectively. This can be challenging for… Read More

Students with Down syndrome have delays with cognitive ability. Their brains have a delayed reaction when their neurological system sends a message to complete a task. This causes them to take longer to complete a task than their non-disabled classmates. But since federal legislation requires students with learning disabilities to be educated in the same… Read More

In the past few years, there has been a move away from the educational standards of the No Child Left Behind Act to a new system called the Common Core State Standards, or CCCS. These standards provide guidelines for the subjects of reading, language arts and math, and they are being implemented in all states…. Read More

Mainstreaming Special Education in the Classroom

Every child has the ability to learn, but the way children learn and how much knowledge they can absorb can vary considerably — especially for a child with special needs. Yet, as a society we owe all children a chance to reach their potential, so it is important to create the best possible learning environment… Read More