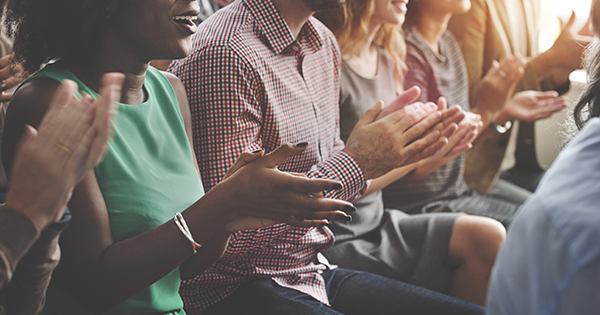 Almost every teacher will tell you that they didn’t choose their profession for the spotlight. For many teachers, their greatest successes are seemingly small gestures, words of encouragement, and moments of connection that happen with their students in the classroom every day. Still, these teachers are making an impact by developing innovative curricula, thoughtfully engaging with their students, and finding opportunities to connect education to the world outside the classroom.

Every state and school district has teachers whose efforts should be recognized—not just once locally, but over and over again. Here’s our own little way of recognizing 10 standout teacher rock stars (in no particular order).

1. Barry White Jr., who has a handshake for every student in his class

Barry White Jr., a 5th grade English teacher at Ashley Park PreK-8 School in North Carolina, has a system for connecting with each of his students before they even walk through his classroom door. White has a customized handshake greeting for each of his 40 students (many of which incorporate dance moves), and he has been praised for his dedication to building trust and fostering authentic relationships. When his students sit down, they’re excited and ready to learn. Videos of White’s routine went viral in February, and the enthusiasm during each handshake—from both student and teacher alike—is inspiring and unmistakable.

At Cheatham Middle School in Tennessee, language arts teacher Amy Pemberton is transforming the environment of her classroom. After researching flexible seating in graduate school, Pemberton is adding bean bags, high tables, and more (think coffee shop décor), and covering the harsh lighting that can have adverse effects on students with ADHD and other learning disorders.

Pemberton’s approach stems from her desire to make her classroom inviting and safe, and particularly takes into account the experience of students who come from unstable home environments. Her classroom, with its new layout, is designed to be another kind of home.

Lois MacMillan is an 8th grade history teacher in Oregon who is bringing the musical Hamilton into the classroom. MacMillan shares her students’ passion for Hamilton: the linked article about MacMillan notes that she has a T-shirt that reads, “If Hamilton can write 51 essays in 6 months, I can probably make it through the day.” Jokes aside, MacMillan is one of a group of teachers who are taking advantage of the nation’s obsession with Hamilton’s legacy which, in most classrooms, was previously contained within a dry chapter of their history textbook. Now in MacMillan’s classroom, it’s the star of the curriculum.

Katherine Gibson Howton is a high school teacher in Oregon who keeps a snack cabinet stocked in her classroom so that none of her students are hungry during the day. According to Howton, 20% of the students at her school face housing insecurity, and she knows that many deal with food insecurity as well, especially at the end of the month.

For students, food insecurity and the ability to learn are inextricably linked, and Howton’s snack cabinet practice—which she posted about on her Facebook page in March—has opened up a conversation among other teachers and administrators at her school. While other teachers had snack cabinets of their own, they, like Howton, hadn’t talked about the practice openly. Now, they’ve started a dialogue.

5. James Butler, who trains other teachers to implement mindfulness in the classroom

James Butler is a former “teacher of the year” in an Austin, Texas school district. Now, as the school system’s first mindfulness director, he trains other teachers in anti-stress techniques that they can teach to students. Specifically, Butler prepares both teachers and students to recognize symptoms of stress and how they affect their thinking leading up to tests or examinations. He equips teachers to lead their classes through daily exercises, which are designed to be useful tools for students who deal with nerves and anxiety before evaluations. The program has now been expanded to 400 teachers in 130 schools across the district.

6. Alex McNaughton, who emphasizes real-world connections in his geography curriculum

Alex McNaughton, a history and geography teacher at YES Prep Southeast in Houston, Texas, believes in the importance of making real-world connections to his lesson plans, especially during times of crisis. During Hurricane Harvey, when school was canceled, his students had been sending him photos of evacuation boats going past their houses. As he looked at the photos and saw how geography concepts were affecting his students across the city, he planned a lesson about how urbanization impacts flooding. Though he had previously planned this lesson for the end of the year, he believed that helping his students find answers would help them process how they were feeling. Having taught a lesson about the Electoral College following the 2016 election, he felt hopeful that a lesson about the flood would operate similarly: to provide clarity amid a crisis.

7. Todd DeJong and Alex Gates, who gave students $2 each in seed funds for hurricane relief

Two sixth-grade teachers at Kraft Meadows Middle School in Caledonia, Michigan, recently witnessed the power of small actions in the classroom making a big difference. Todd DeJong and Alex Gates gave $2 to each of their combined 180 students, hoping it would inspire them to help those affected by Hurricane Harvey. Using the seed money, students developed a variety of creative fundraising efforts, including a neighborhood cupcake competition with an entry fee. DeJong and Gates had hoped the students could raise $1,000, but their expectations were significantly surpassed. Only two weeks later, students had raised $8,500 for hurricane relief and donated all proceeds to the American Red Cross.

Logan Pullin, a teacher at Bay-Waveland Middle School in Bay St. Louis, Mississippi, began teaching in 2012, and his first seventh-grade world history class was an impressive group. Now, the students are seniors, and Pullin has written them each a letter to wish them a great senior year, offer words of encouragement, and tell them how proud he is. He was inspired to write the 120 letters by his wife, Ashley, a sixth-grade social studies teacher at the same school who keeps a “Why I Teach” binder. Pullin has been walking over to the high-school next door during his off-periods and lunch breaks, finding each student and giving him or her the letter in person. He can only deliver so many in one day, but now that students know about the letters, they eagerly await them.

9. Megan Witucki, who taps community expertise to broaden her curriculum

Megan Witucki, an elementary school teacher at Compass Montessori in Wheat Ridge, Colorado, enhances her curriculum by inviting community members into her classroom. She began this practice after being approached by a mother who was passionate about Mayan history, and wanted her child to learn more about native cultures. Witucki then invited the mother into her classroom to share her knowledge, and subsequently established additional classroom partnerships with other native culture organizations. Similarly, after an assemblage art project, she invited a local artist specializing in assemblage into the classroom to speak about her own work and inspirations. Through Witucki’s engagement with community experts, she and her students have access to a wide variety of compelling educational resources.

10. Hattie Mitchell, an educator who seeks to help homeless families

Hattie Mitchell, a Los Angeles educator, says the changing factor in her life was education. Now, with the opening of Crete Academy, the independent charter school she founded, she wants to make education more accessible for homeless families. The school, which opened this year in South L.A., has enrolled 140 students so far, and is serving some of the poorest communities in the city. The school’s strategy does not stop with providing services to students while they are at school; through a wellness director, three AmeriCorps staffers, and a host of other services, it provides services to the entire family. And Crete isn’t exclusive to homeless students, which is a factor in destigmatizing the experience of homelessness. In fact, Mitchell’s own son is enrolled.

A round of applause for these 10 incredible educators!