'iPadSammy's' Guide to Integrating Technology in the Classroom

If you really want to integrate technology into the classroom, asking which apps are best for math or science is the wrong question. 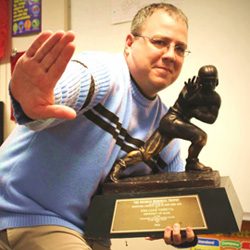 Jon Samuelson, education technologist and author of the iPadSammy blog.

“There’s tons of great math apps if you are trying to ‘skill and drill’, but there’s more to technology than that,” said Jon Samuelson, best known as iPadSammy from his blog of the same name

Samuelson has worked with technology in the classroom since well before apps.

“When I started teaching, we were excited to get the Internet hooked up,” he laughed.

He was a technology leader in a school in Alaska, earning the right to keep a MacBook as long as he taught in the district. At the Austin, Texas, elementary school where he now works as education technologist, Samuelson rolled out iPod Touches to his students before the iPad existed. He later introduced the iPad to the entire district.

So, how does he integrate technology into classrooms?

“Find three or four apps that really inspire you and build around those,” Samuelson said. “You have to go with what you are normally teaching, but apps allow for creativity that lets you reach students in a variety of ways.”

Teachers don’t have to work with history games, math games or quizzes. They can use videos, photos or anything else that gets the creative juices flowing.

The best part, he added, is that teachers don’t have to master an app. They need only to learn the basics of what it does. Students usually can answer questions when something unexpected comes up. After all, they are digital natives.

Most importantly, teachers must plan a work flow. They need to know where they will save the work, and how to work with their school’s network firewall (so if you plan to save to YouTube, make sure your school does not block the site).

3 Ways to Get Creative with iPad Apps

The most important thing for Samuelson isn’t that teachers copy these ideas or use apps for the dreaded skill-and-drill. Rather, he said, it’s to be inspired by what technology can do and how it can help students better understand their world.

Keep up the conversation. Check out Samuelson’s blog at ipadsammy.com or follow him on Twitter; his handle is @ipadsammy