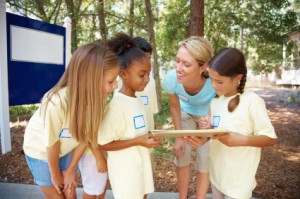 In light of this stark assessment, the effort to make environmental education (EE) a matter of national policy and promote environmental literacy in today’s K-12 classrooms continues to gain traction, even as it becomes something of a political hot potato.

From the progressive ideas put forth in two seminal books first published in 2005, Richard Louv’s Last Child in the Woods: Saving Our Children From Nature-Deficit Disorder and Ecological Literacy: Educating Our Children for a Sustainable World (Bioneers) by Orr, Stone, Barlow, and Capra, the No Child Left Inside (NCLI) movement was born.

Intended as an amendment to the Elementary and Secondary Education Act of 1965, the No Child Left Inside Act was first introduced into Congress in 2008, and after failing to find support was re-introduced as a bi-partisan bill in 2011 by John “Jack” Reed (D-RI).

What NCLI Would Do

The bill, if enacted, would grant the Secretary of Education the power to award grants and sub-grants to states, educational agencies, and other entities to promote the development of rigorous environmental education programs and teacher training across the country.

Ideally, NCLI-funded curricula would motivate students to learn about vital ecological issues such as:

Today, as the NCLI legislation languishes in committee, more than 2,000 organizations representing more than 50 million Americans endorse passage of the act in some actionable form, and interested citizens are encouraged to sign petitions in support of the bill.

Critics of this national initiative claim that the bill politicizes basic K-12 education, and considers a strident emphasis on environmental issues as “imposing special interest-driven doctrine” on children. Another argument asserts that even if a bill is passed, kids will not be motivated to appreciate environmental issues any more than they do now.

Making NCLI Work in the Classroom

Iozzi voiced his concerns about EE in a posting on Clearing, an environmental literacy education website:

“For EE to be successful at the elementary level not only is teacher preparation crucial, but EE concepts, activities, etc., must be built into the curriculum itself,” Iozzi wrote. “This is not a new idea; John Dewey in 1914 proposed a core curriculum that focused on the environment.”

A Summit at the White House

To show its support for the cause, the Obama Administration hosted a Summit on Environmental Education in April, 2012, assembling experts and stakeholders to articulate an emerging vision for EE in the 21st century. Panelists and participants focused on the need for a conscientious environmental education policy in today’s world, and the role of government in advocating EE partnerships, activities, and goals.